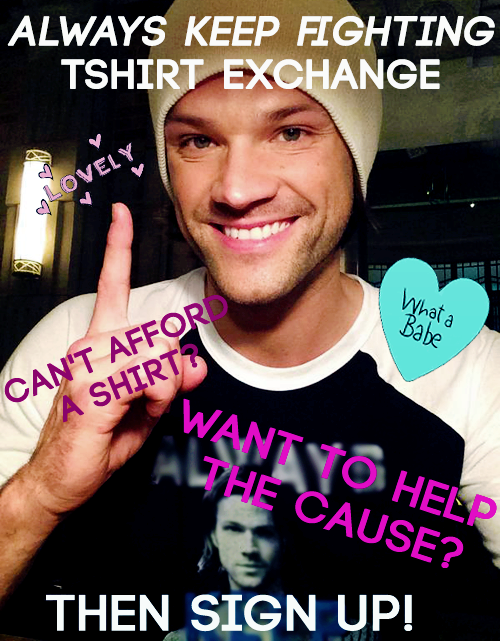 Hey everyone! I was inspired to set up this tshirt exchange by a few messages I got at a Sam blog I run on tumblr from people who really wanted to get a shirt from Jared's campaign but couldn't afford it, for whatever reason. Since then, I've gotten over 150 messages from people telling me they can't afford a shirt and why it would mean so much for them to be able to get one, their reasons ranging from having an eating disorder to self-harming to having attempted suicide.

I've been able to match up about 40 people with generous donors, but that leaves over 100 people. I don't expect to match all of them up, but I'd love to be able to help out a few more people in the next 3 days before the campaign ends. If you're interested in buying a shirt for someone, please feel free to send me a PM here or send me a message on tumblr (send it 2x just to be safe). And if you can't give, I'd really appreciate people passing this message along on lj :)

Also! By donating a shirt, you're entered to win an art piece of your choice up to $30 in value from the society6 shop of one of the following incredibly talented fanartists: zeddless, ellaine, & mydearhenry. (ﾉ◕ヮ◕)ﾉ*:･ﾟ✧

p.s. I'm not too familiar with navigating lj when it's not fic-related, so sorry if I did anything wrong! And thank you to the lovely

amberdreams for not only donating, but also pointing me in the direction of this comm.
Tags: always keep fighting, awesome cause, i have already given four away, maybe someone else can do something?
Subscribe